A glance at the history of Brightwalton

The History Of Brightwalton In Paperback

Brightwalton Is In The Doomsday Book

The Doomsday Book has a reference to our old church but there are very few traces of it in the new All Saints Church. A single framed painting hanging on the South wall does provide an idea of what the Saxon Church once looked like. It seated 120 and had a square tower which so soundly was it built, its demolition required explosives! Within the old churchyard there are still traces of the brick and flint walls. There is a quaint footpath leading through the churchyard. The old churchyard was restored in 2005 and those memorial stones that could be deciphered were catalogued and noted in the book "Brightwalton, a Downland Village". The burial ground was used until 1893, and in 2015 the maintenance of the churchyard passed over from the Diocese of Oxford to Brightwalton Parish Council.

The original timber framed village hall is first mentioned in the Parish Council minutes in 1926. Over the years it has been used for many forms of entertainment; in the 1930's a travelling cinema used to set up in the hall, plus there was a social club with snooker table, and the village football team, cricket teams and ladies hockey club all used the hall facilities. In the 1940's the Americans from the Welford base would often come over and use the hall for dances. More recently various other clubs and activities have been catered for, including the nursery school. In 1975 the first village fete was held to raise funds for the proposed new hall, this still continues to run every May and is a true community event bringing the surrounding villages together too. From the funds raised, a new village hall was built in 1976 to better suit the needs of the village. This was then extended again at the beginning of the 21st Century with the assistance of a Millennium Grant.

Lies on the busy B4494 road between Newbury and Wantage, Historically it was an important stopping place for travellers, with a pub, a farm (Cotswold Farm) and several cottages. In the 19th century there was a grocery shop and a bakery within the Holt, plus a garage and petrol station near to where the electrical sub-station is now. The Marquis of Granby pub stood in the centre of the Holt and dated back to the middle of the 18th century. It was a popular place for Brightwalton Villagers, who lacked a public house in the main village. It ceased trading in the 1980's and was sold and divided into two houses.  Holt Common known as Cow Common in the 18th century, stretched on either side of the road up to Brightwalton. Villagers were allowed to graze their animals on the common, but by 1870 the majority of the land had been enclosed and claimed by the farms. An area of common still remains on the byway between Brightwalton Holt and Leckhampstead today. In 1887 a dozen skeletons were found in the Holt, these were believed to be soldiers from the fighting that occurred near this spot during the Civil War in the 17th century

Dunmore Pond sits at the West of the Centre of the village. There is a record of the pond in 1240 when it was known as Dunian Mere (potentially meaning the "dark pond"). It supplied water for the animals and fields as well as for the houses. It was a popular meeting place and play area of the Children. In the 1970's Dunmore Pond was cleared by a Conservation Group made up of volunteers from all over the county. In August 2000 a Trust was set up and a Millennium grant was awarded. A major clearance was undertaken by local people, and part of the land surrounding the pond was designated a wildlife conservation area. In 2016 the land was donated to the Parish by the Wroughton Estate and has subsequently been registered as a "Village Green" to ensure the area is kept for the enjoyment of the villagers for years to come. It is still a popular place for people to meet and walk, and children to play. The Pre-School and School occasionally also use the area to study the natural pond life. Regular village working parties take place to ensure it is kept open and accessible for all to enjoy.

Brightwalton War Memorial was recognised in April 2016 on the Local Listing of Heritage Assets by West Berkshire Council in partnership with West Berkshire Heritage Forum. The following information has been taken from the listing:

It has been recognised as West Berkshire's oldest Great War memorial erecting in 1916 and standing at the junction of Common Lane facing down towards the church. Built largely from locally found materials in 1916 it commemorates the fourteen young men from the parishes of Brightwalton and Catmore who fell in World War 1. ​ 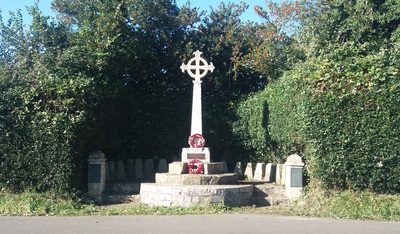 The earliest known World War 1 memorial was erected in Rawtenstall, Lancashire in September 1915, very few more were erected before this memorial in it was among the first dozen or so WW1 memorials in the country. The memorial was constructed using various it ems already available in the village; only the shaft of the cross was new stone. The pavement and the base was that of a
mediaeval cross that previously stood in the nearby churchyard and the cross itself was rescued from a nearby church (believed to be Peasemore) when it was being altered some decades earlier.

The inspiration for the memorial probably came from the Rector (Rev H F Howard) who had already lost two sons in the conflict. It was created for the inhabitants of both of his parishes: Brightwalton and neighbouring Catmore. The inscription was completed after the war and the dates now read 1914 containing the names of the fallen were added on low pillars either side of the cross. The carving on the based became weatherworn and largely illegible so a plasticfaux has been added, reading To the Glory of God in Memory of those who fell in the Great World War 1914 - 1919.

This is much treasured memorial that holds an important place both in Brightwalton's history and its ongoing remembrance of past and present sacrifices. It provides a landmark feature which contributes to the character of the conservation area, the boundary of which has a small link to West Berkshire Local List of Heritage Assets. The Memorial is a nationally recognised war memorial, number 9054 on the National Inventory of War Memorials, held by the Imperial War Museum. As a particularly early surviving example of a village memorial it has national significance.